Coyotes are a common wild animal in Illinois, but the population has seen a large increase in during the past 2 decades, especially in the Chicago area. In Aurora, reported coyote sightings are common especially on the City's far Southeast side where homes are adjacent to rural or wooded areas, however, sporadic sightings have been reported on the West side. 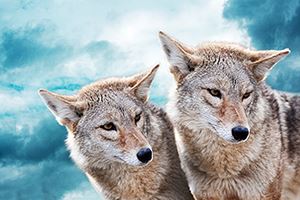 Coyotes are more nocturnal animals but may be more visible during the daytime in spring and summer.

In the wild, coyotes primarily feed on rabbits, rodents, birds, fruit, and insects; thus helping control these types of populations where they inhabit. While most coyotes are leery of people and tend to stay clear of humans, they can still be a danger, especially to young children. It is also not unusual for the animals to attack dogs and other pets. However, the majority of attacks could be prevented or reduced by following some simple safety rules.

The most effective way to prevent attacks is to eliminate feeding coyotes either intentionally or accidentally. Coyotes can be attracted to bird and squirrel feeders, bread that is fed to ducks and geese, pet food that is left outside, and other unintentional food sources. When coyotes find these types of food in residential areas, they may lose their fear of humans and eventually test both people and pets as possible prey.

If a coyote is spotted during the daytime, people should exhibit caution since the animal may have become habituated to humans and thus more likely to attack. People approached by a coyote should yell, wave their arms, and/or throw an object at the animal - but should never run away. It is also a good idea to carry a walking stick when in areas that could be inhabited by coyotes. Young children should not be left unattended in areas where coyotes may live.

It is important that family pets such as dogs and cats - especially those smaller in size - not be left unwatched while outside. Coyotes can also be attracted to free-ranging domestic and feral cats. Domestic cats should be kept inside and feral cats should be spayed or neutered. Coyotes are attracted to cluttered areas including brush piles and old construction sites so keeping those types of areas clear will help prevent them from lingering in a particular area.

If people or their pets are attacked by a coyote within the City limits of Aurora, contact should be made with the City's Animal Control Division at 630-256-3630. You can also report a coyote sighting using an online form.