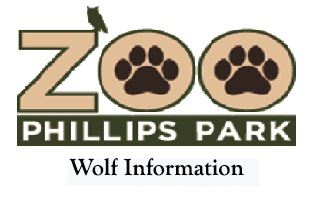 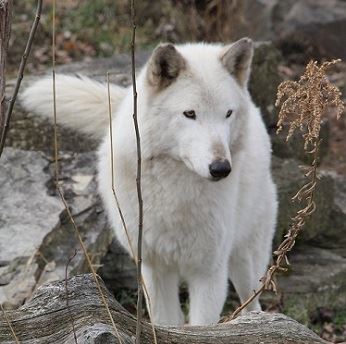 The wolf is the largest member of the canine family, and can grow to be 6' long, and weigh between 55 and 150 lbs!  Wolves live to be about 12 years old in the wild, and up to 16 in captivity.

In the wild, wolves prey on a variety of mammals such as elk, moose, and deer. They will also feed on smaller mammals such as beaver and rabbits.  They live and hunt in packs, working together to take down prey for the group.  The Alpha male and Alpha female lead the pack.

Wolves come in a variety of colors ranging from mostly Black, to nearly entirely white, with various shades in between.

Wolves communicate with each other using a variety of methods, including vocalizations (howling), Scent marking, body expressions (tail movement, etc.) and facial expressions.

Phillips Park Zoo is home to two Grey Wolves, named Montana and Sierra.  They are brother and sister, and came to the zoo as pups in 2005.  So they will turn 14 next spring!

We have recently made some modifications and improvements to the wolf enclosure (we added some new dens!)