This page outlines the scope of projects being addressed in some form by this board or suggested by this board. As with any list of ongoing work, specifics are constantly shifting. If you have any questions or information for the board regarding these or other potential projects, email [email protected]. 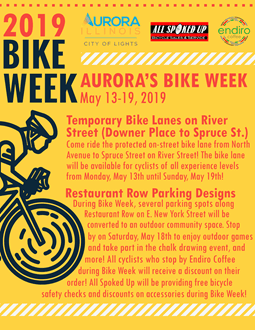 Bike Week 2019: Let’s celebrate everything bikes! The City of Aurora Bicycle, Pedestrian and Transit Advisory Board, in conjunction with the Kane / Kendall Council of Mayors (KKCOM), is hosting its first annual Bike Week, May 13-19.

Bike Week 2019 brings together bike advocates through coordinated events and demonstration projects to encourage more permanent bicycle infrastructure and programming. Aurora’s Bike, Ped and Transit Board promotes healthy, sustainable and economic transit options and wants to start a larger conversation among Aurora residents about the role of biking in the community and the positive benefits it can offer.

The City of Aurora is implementing some temporary infrastructure elements during Bike Week. Watch for temporary separated bike lanes on River Street that connecting the existing “Green Mile” separated bike lanes that end at Downer to the Fox River Trail at Spruce. Come check out the parklets - parking spaces temporarily removed to become community gathering spots - near Restaurant Row on New York Street for a variety of bike-related activities. During Bike Week, all cyclists who stop by Endiro Coffee will receive a discount. All Spoked Up will be offering free safety checks on Friday and Saturday, plus a discount on accessories. On Saturday, May 18, kids will be encouraged to contribute to the public chalk drawing in the parklets, and the Aurora Police Department will hand out information and stickers. The Bike, Ped and Transit Board and the City challenge residents to test their knowledge on driving in the presence of bicycles or safely bicycling on roads. Try either a motorist or bicyclist quiz at www.BikeSafetyQuiz.com. Most importantly, choose to ride your bike that week instead of driving! Ride to the store, take your bike out to eat, or just take a trip on the trail -- then tell us about it!

KKCOM is also collecting feedback about temporary infrastructure created during Bike Week in a survey, open May 1 through June 7. Positive reviews from residents who used the temporary infrastructure could help inform municipal staff and elected officials to convert these temporary projects into permanent additions. Responses to this survey will be very helpful to determine the effectiveness of these treatments.

May Is National Bike Month! The Bike, Ped and Transit Board supports ALL efforts to advocate for and encourage bicycling. Tell us what you know is going on in Aurora for Bike Month at [email protected], and we will post it here.

Complimentary Bike Safety Checks (May 23): Gillerson’s Grubbery, 31 W. New York St., is hosting a free bike safety check event on Thursday, May 23, 4:00 - 7:00 pm. All Spoked Up will conduct the checks in the parking lot of BeeBee’s Deli (just north of Gillerson’s), and Gillerson’s will serve specially priced Revolution beer inside the restaurant.

BMX Park: The BPT Advisory Board is researching different locations in Aurora to install a BMX-style pump track. This is a track that will provide hours of outdoor recreation experiences for the residents. The location is still being worked out, but check back for updates.

Biking and Walking Safety in Schools: The BPT Advisory Board is in the process reaching out to all K-8 Aurora schools (six districts, plus private schools) to offer support in getting biking and walking safety education into the K-8 curriculum per the Bike Walk Education in Schools Act passed in 2018. To receive a list of free age-appropriate resources and curricula, to start a bike/walk safety initiative in your school, or to give feedback, contact [email protected].

Safe Routes to School: Safe Routes to School (SRTS) is an approach that promotes walking and bicycling to school through infrastructure improvements, enforcement, tools, safety education, and incentives to encourage walking and bicycling to school. Nationally, 10%–14% of car trips during morning rush hour are for school travel. SRTS initiatives improve safety and levels of physical activity for students. SRTS programs can be implemented by a department of transportation, metropolitan planning organization, local government, school district, or even a school.

Improving Bike Access to West Fox River Trail via Lake Street: To help reduce the barrier for bicyclists posed by Lake Street and increase access to the Fox River Trail, the Board analyzed over a dozen possible access points along Lake Street. View the PDF here. (September 2018)

Montgomery Road Multi-Use Path Project: Located in the City of Aurora, a minor west side portion of the project is in Kane County and the rest falls under DuPage County jurisdiction. The proposed multi-use path along Montgomery Road will include constructing an 8-foot asphalt path from Waubonsie Creek Trail to Middlebury Drive on the south side and removal of a 5-foot existing sidewalk to build the new path. The path will tie up to the multi-use path that was recently constructed on Montgomery Road just west of Eola Road intersection. The proposed path will continue east of Ridge Road on the south side of  Montgomery Road between Ridge and Middlebury and loop back to the north side of Montgomery from Middlebury to connect to the Middlebury West Park located across Bar Harbour Road. The curb ramps at all major intersection crossing will be ADA compliant with detectable warning signs. The project length is approximately 5,830 feet (1.10 miles). Project construction begins mid-spring 2019.

Edgelawn Drive Bikeway Project: Located in the City of Aurora within Kane County, the project is located west of the Fox River, east of Orchard Road, and south of I-88 on Edgelawn Drive, a major collector that runs north to south between Sequoia Drive and Jericho Road. Limited from north to south by Indian Trail Road and the Virgil Gilman Trail, the proposed work on Edgelawn is a combination of 5’ wide bike lane striping, placing of shared lane markings (sharrows) and striping 7’ wide urban shoulders (combined bike lane/parking lane) between Indian Trail and the Gilman Trail. To accommodate the bike lanes along the length of Edgelawn, the two through lanes in each direction between Garfield Avenue and Kenilworth Place will be reduced to one lane each direction. To accommodate the bike lanes, the shoulders are proposed to be widened up to 4 feet in each direction between Kenilworth and Prairie Street.

The bike route also is proposed to extend east via Prairie and follow north on LeGrande Boulevard, west on Garfield, and north on Gladstone Avenue to terminate at Gladstone and Galena Boulevard intersection opposite to West Aurora High School. Prairie is proposed to have 5’ wide bike lanes striped along the stretch from Edgelawn up to S Western Avenue on both sides of the street along with associated pavement markings and signage for way-finding. The stretch between Western and LeGrande on Prairie will host a 7’ wide combined bike and parking lane on both sides of the street along with sharrows. This combination will allow Aurora University patrons to be able to park on Prairie to maintain the current scenario. LeGrande, Garfield, and Gladstone will have sharrows placed to facilitate bicyclists travel. The project length is approximately 3.9 miles (20,600.00 feet). The anticipated project construction is mid-late 2020.

Bicycle and Pedestrian Bridge: A bridge over the Fox River for bicyclists and pedestrians will create a safe and direct path from the Aurora Transportation Center (a terminal station on the BNSF line) to the Fox River Trail. Visitors to RiverEdge Park will be able to park on the west bank of the river and walk to the venue. This construction will provide a direct route to the Metra station and eliminate the mile-long detour from the near west side via New York Street or Illinois Avenue. Grants from Kane County and the Fox Valley Park District provided the initial funding for the bridge. A grant from the Dunham Fund added to the available funds. Transit funding and a redesign provided the final pieces needed to begin building a bridge with concrete piers, no stairs, a minimal slope, height that matches that of the Illinois Avenue bridge, a solid earth base on two banks, and re-routed bike trails curving away from the river to meet the bridge. As of May 2019, four concrete piers from the east bank- to and over Blues Island - are now being completed. Once the deck is added, the man-made coffer dam will be relocated to the west bank to finish the western half of the bridge.