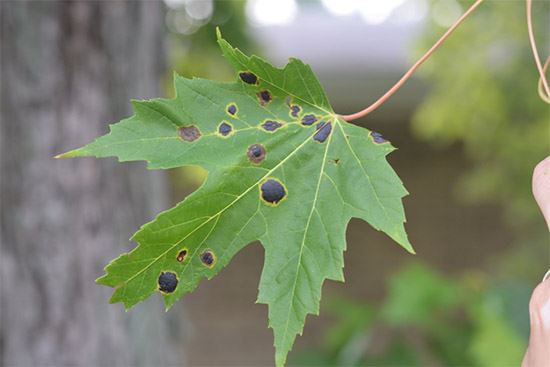 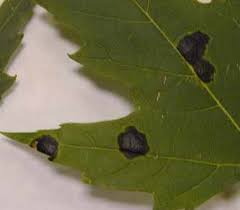 Tar spot is a fungal disease that causes a great deal of concern for home gardeners due to its appearance.  Luckily, this disease is generally a cosmetic problem, rather than a real health issue for trees.  The tar spot seen on maples is caused by three related fungi, Rhytisma acerinum, R. americanum and R. punctatum.   Symptoms vary slightly from pathogen to pathogen, but all three organisms produce fungal spots that do look like spots of tar.  While tar spot can affect many species of maple, it is commonly reported on Norway, silver and red maples.

Early symptoms of tar spot start to develop on leaves in early summer, but often go unnoticed as they are fairly inconspicuous.  At this stage, the leaf spots are light green to yellow green.  It is not until mid to late summer that the darker coloration of the spots shows up.  Development of the tar spot varies by the species of pathogen.  One species produces tiny black spots that later coalesce into larger black spots that may be 1/3 to 1/2 inch in diameter. These spots will eventually be slightly raised.  Another species of the pathogen causes dark spots that may be an inch or more in diameter.  These spots are usually more prominently raised and have a textured surface.  The third tar spot pathogen causes smaller spots, and this form of tar spot has been referred to as speckled tar spot.

Late in the season, tar spot may cause some leaves to drop early.  The number is generally not significant and so, little to no harm is done to the host tree.  Tar spot often goes unnoticed on the host tree until some of the leaves begin to fall.

The black spots on the leaves contain fungal spores that can survive the winter.  These spores will be released in spring as new foliage is emerging and will be carried to that new foliage on the wind.   Raking and destroying leaves will reduce the number of spores that survive to the next spring.  Ideally, for this to be truly effective, everyone with an infected maple in the neighborhood should rake and destroy the leaves of their tree.  Composting may not completely destroy spores, because home compost piles seldom heat up enough to really kill fungal spores.

Fungicides are available to treat tar spot proactively in spring, but are seldom recommended since tar spot does very little damage to the tree.  The cost of treatment may outweigh the benefits.  Contact the Plant Clinic at The Morton Arboretum for current recommendations (630-719-2424 or [email protected]).  This information can also be found in “Pest Management for the Home Landscape” published by University of Illinois Extension.