The Grand Army of the Republic (GAR) Memorial Hall, Post 20 is one of Aurora's most beloved landmarks. Since its earliest days, it has stood as a symbol of public and private partnership and cooperation. It was constructed in 1878, with funds raised by the citizens of Aurora, many of whom had fought in the Civil War. Their intention was to create a sacred monument to Aurora's Civil War veterans and a shrine to their fallen comrades: men who had died in the cause of preserving the union and ending slavery. 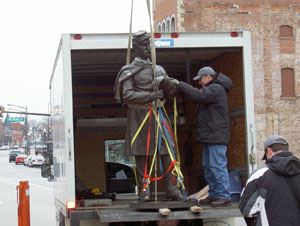 It would also serve as a veterans' meeting hall and as Aurora's first free public library. Over the course of 60 years Post 20 boasted a membership of more than 700 Civil War Veterans, representing 70 Illinois regiments. By 1939, however, membership was dwindling so Daniel Wedge, a past commander, organized the GAR Memorial Association. The Association continued to hold meetings in the hall until the late 1990s, when the City was forced to close it due to structural problems.

The City of Aurora began the restoration of GAR, Post 20. The foundation, walls and roof were stabilized, most of the exterior was completed, and a carefully designed addition was added to provide for modern utilities and access. This phase was largely funded by the City of Aurora. In 2008, a grant from the National Trust For Historic Preservation/American Express provided for restoration of the stained glass windows, and construction of new stained glass panels to replicate the original windows that were lost in a 1904 renovation. In addition the City also received a Kane County Riverboat grant of $50,000, and a grant of $100,000 from the Illinois Department of Commerce and Economic Opportunity.

Restoration of the GAR came to a halt due to the faltering economy. This left some of the final exterior work unfinished, and all plans for interior work were put aside. The IDNR grant and additional funding from the City of Aurora now means that the restoration work could resume.

The restoration of the Grand Army of the Republic Memorial Museum, Post 20 began in April of 2011, thanks to a grant of $250,000 from the Illinois Department of Natural Resources, and an additional $95,000 from the City of Aurora. This work will include both exterior and interior finishes, such as structural and electrical work, wall and ceiling painting, floor refinishing and masonry repair, and stairway and woodwork restoration.

It is necessary to complete the majority of the work to allow for public access. Once the restoration is complete, the Commission plans to open the hall as a museum and center for veterans, for genealogical research, and as an educational venue about Aurora's role in America's wars.