Carl Fisher, founder of the Indianapolis Motor Speedway, developed the idea for a ‘Coast-to-Coast Rock Highway' in 1912. His plan called for a completely graveled highway running continuously from New York City to San Francisco. Fisher called upon auto manufacturers and accessory companies to donate a portion of their revenues to help cover the $10 million cost of the improved road. Although Henry Ford did not support the highway, other auto giants such as Frank Seiberling of Goodyear and Henry Joy of Packard were heartily behind it. Joy later became the highway's main spokesman and devised the idea of naming the highway for President Abraham Lincoln and obtaining Congressional funding.
The Lincoln Highway Association was formed in 1913 to carry out Fisher's vision. Making sure to avoid larger cities and scenic attractions, the association mapped out the 3,389-mile route from Times Square in New York City to Lincoln Park in San Francisco. A one-mile stretch of concrete or ‘seedling mile' was constructed in 1914 along the route near Malta, Illinois to demonstrate the superiority of concrete roads and urge the public to support the movement for better roads. 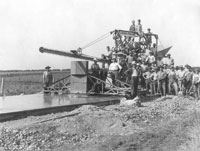 Proving that even a proper woman could manage the cross-country trip, etiquette expert Emily Post publicized her 1915 journey from New York to San Francisco in her first hand account, By Motor to the Golden Gate. In 1919, 209 men in 76 vehicles embarked on the Army's First Transcontinental Motor Convoy in order to demonstrate the advantages of improved roads in case of war. The motor convoy was welcomed in Aurora by thousands of onlookers at an elaborate lunchtime reception held by the Aurora Red Cross in McCarty Park. This 2 month long trip from Washington, D.C. to San Francisco, along with firsthand familiarity with the German Autobahn gained during World War Two, later influenced trip participant Dwight D. Eisenhower to promote the development of the interstate highway system during his presidency in the 1950s.

Road improvements and highly publicized expeditions generated much interest in the Lincoln Highway. By 1919, average Americans felt more confident about taking up the adventure of cross-country motor travel. With the aid of auto club guides and maps, auto travelers found motoring easier and less costly. Even travelers on a shoestring budget loaded their Fords with all manner of camping gear, luggage, children, and pets. By the mid-1920s, it was estimated that 10 million people had tried auto-camping at least once.

This surge in popularity of automobile travel and the Lincoln Highway also helped spark the development of many new hotels along the route. The Aurora Hotel constructed in 1916-17 was as an "example of the excellent accommodations being provided for the comfort of transcontinental and other motorists."