Camping Along the Route

For those traveling on a budget or the outdoors man, the practice of "motor hoboing" provided an appealing alternative to a hotel stay. Often trespassing on farmer's lands, drinking unsanitary water from streams, and littering the roadside with refuge, these ‘tin can tourists' were not the type of visitors towns along the route desired. 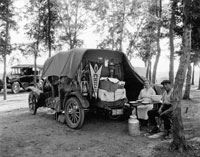 Between 1920-24, municipal organizations established auto camps in order to prevent these motor tourists from "squatting" where they were not wanted. In doing so, opportunistic civic boosters also hoped to establish good reputations for their towns and attract the increasing number of auto travelers to their towns to buy groceries and gas. Over five thousand municipal camps were established by the mid 1920s. Most of the camps were free and provided domestic apparatus such as fireplaces, picnic tables, coin operated gas stoves, electric lights, tent floors, and recreational equipment so tourists could leave more things at home.
The Aurora Automobile Club established an auto-camp along the Lincoln Highway around 1923 on the outskirts of town near Phillips Park. The 1924 edition of the Complete Official Road Guide of the Lincoln Highway noted that this new "free camping ground at the City Park" had "2 fireplaces, 2 ovens and a sink" in addition to a "good well of pure drinking water just outside the building." 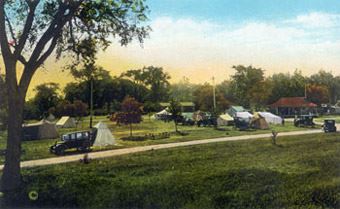 The added comforts and amenities of municipal camps such as clean showers and privies, graded sites, and safe water attracted more women and families to auto camping. While most men viewed auto-camping as an escape from the demands and pressures of life, women rarely got a vacation from the domestic responsibility of meal preparation. One woman said, "The difference between the men I have camped with and myself has been this; they have called it sport; I have known it was work."

In the 1920s, camping equipment manufacturers marketed big tents and auto beds that could be set up right in the car to the female auto-camper who was described as being afraid of insects, cold, and ground moisture. Some women suspected that despite daring male talk about sleeping under the stars, pitching a tent near an isolated trout stream and cooking over a wood fire, many men secretly welcomed the female presence as a good excuse to get more comfortable facilities than were customary on all-male camping excursions.

As municipal auto-camps grew in popularity, they became overcrowded and noisy and sponsors had difficulty keeping them maintained. By the mid-1920s, camps began to impose daily fees to pay for added facilities and screen out any campers who were unlikely to spend dollars at local businesses.

Now able to compete for tourist dollars, private cabin camps that provided travelers with all the comforts of home including bedding, electricity, heating, and kitchenettes grew in number. Although the cabins were hardly big enough for a bed, travelers loved them because they still provided the feeling of camping in the outdoors, but provided some privacy and protection from the elements. Motor courts with cabins were arranged in a ‘U' or ‘L' shape with a central courtyard to add to the sense of security and coziness. In late 1940s, the cabins were connected, neon added when possible, and motorists slept in a "miniature, idealized version of home, complete with oil paintings on the wall, a Bible, and hangers in the closet. The motel was born."
City Council
Municipal Code
Payments
Employment
Stay Connected
Aurora Alert
Info
aurora
My Aurora
My Place
Television
Weather bug