Listed on the National Register of Historic Places, LaSalle Street between Downer Place and Benton is significant as an early automobile commercial center in Aurora. It is also noted for its examples of Victorian era commercial buildings, 20th century Commercial style buildings, and fraternal lodge buildings. Automobile sales and service buildings developed as a distinctive building type in the early 1900s. They were designed to blend with other commercial buildings, and were generally located on the fringes of the central business districts. This block of LaSalle Street was also on the original Lincoln Highway route through Aurora, transferring traffic from Benton Street over to Downer Place in this one block section of LaSalle Street.

This was the first automobile sales and service building built in the LaSalle Street Auto Row Historic District specifically for this use. Constructed in 1907, it still features the original elevator that transports cars to the second and third floors for storage and servicing. Coat’s line of cars in 1912 included the Chalmers, EM.F., Hudson, and Flanders. It was constructed with large “I” beams that span the width of the building, providing a large open space without columns for the display of automobiles. The current owner indicated that 30 modern cars can be stored on each floor.

This Commercial style building constructed circa1915 is the first on LaSalle street to incorporate terra cotta into the facade. The terra cotta designs on this building, and on 68-70 S LaSalle, were inspired by Louis Sullivan.

Constructed circa 1912, classical Revival details are carved into the limestone in the blind arches above the second floor windows. The building itself is designed in the Commercial style. 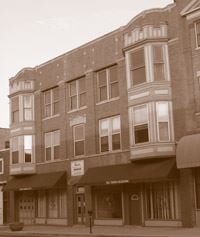 Another automobile sales and service building, the Theiss building was constructed circa 1912 in the Commercial style. It also has the original elevator, however, unlike Coats Garage, this building utilized the new technique of fire-proof reinforced concrete slabs for the floors. A 1912 advertisement indicated that the Buick, Maxwell, Apperson and Baker Electric cars were sold at Central Garage.

Constructed in 1915, this Commercial style building features Luxfer prism glass in the transoms above the storefront windows and doors. The decorative prism glass pieces contain designs that were provided by Frank Lloyd Wright for the Luxfer Prism Company.

Conrad Bjorseth constructed this building in circa1907 for his grocery store. It features recessed balconies with French doors that offered an optimal view on this historic highway and parade route. Bjorseth was the mayor of Aurora during the depression, serving from 1931 to 1936.

This building was erected in 1907 by Finch and McCullouch, one of the most complete printing outfits and binderies in the state. EC. Finch was also elected mayor the same year that the building was constructed. It is still being used by a printing establishment.


This late Victorian commercial building was constructed circa 1890, and features a corner tower with a conical roof, and an oriel bay window on the side elevation.
City Council
Municipal Code
Payments
Employment
Stay Connected
Aurora Alert
Info
aurora
My Aurora
My Place
Television
Weather bug