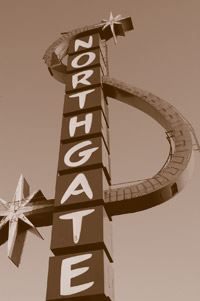 The large sign at the Northgate Shopping Center with the neon lights ending in starbursts is a painted metal structure that was constructed in the 1950s. While electricity allowed signs to be illuminated in the early 20th century, new styles were created as the century advanced, including space age symbols in the 1950s with the fascination with outer space. Neon was another twentieth-century contribution to the sign maker's art. "Neon," coined from the Greek word for "new," is a "new gas," has the useful property of glowing when an electric charge passes through it. Encased in glass tubes it allowed sign makers opportunity to mold light into a variety of shapes, colors and images.

Yet another profound influence on signs from this period is the rise of the automobile, and businesses vying for the attraction of motorists on major auto thoroughfares. This resulted in a significant increase in height and vibrancy to attract the speeding motorist.

All of these influences are evident in the Northgate sign, which was designated a landmark through Aurora's sign ordinance. It was designated because of its unique qualities, and as an icon from the 50s that has transcended its conventional role as identifier for vehicles. It is now valued because it has become a part of our collective memory of a bygone era.
City Council
Municipal Code
Payments
Employment
Stay Connected
Aurora Alert
Info
aurora
My Aurora
My Place
Television
Weather bug