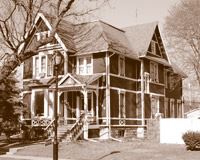 This Stick Style house was designed by John E Minott and built by F. Minium in 1886. It has remained virtually unchanged since its construction, retaining the double front doors with etched glass. Dr. Quereau was a prominent educator in Aurora and managed the Aurora Silver Plate Company. He was a fellow voyager of Mark Twain's during his travels throughout Europe and the Middle East, and may be the professor Twain describes in Innocents Abroad.