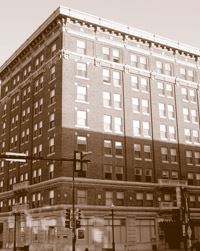 The 8-story hotel was the tallest building on Stolp Island when it was constructed in 1917. The first large hotel in the city, it represented an effort by the citizens who developed it to elevate Aurora's position as a center of commerce. This organization (Aurora Island Hotel Corporation) was responsible for many of the projects which made Stolp Island a commercial center. The building was in a severely deteriorated condition until it was saved by a grass roots effort in 1996. The remarkably restored building is now used as apartments for senior citizens.