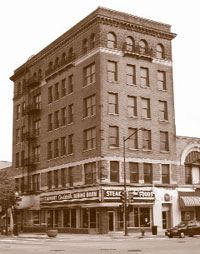 Designed by architect Eugene Malmer, this six-story pressed brick and Bedford stone 2nd Renaissance Revival building was once the tallest building in Aurora and one of the tallest in Illinois outside of Chicago. Malmer studied with William Le Baron Jenney, father of the skyscraper when he was a student in Chicago. In 1915, the building was leased to the Aurora, Elgin, and Chicago Railroad Company to serve as that company's traction terminal station and main corporate offices. It is still often referred to as the "Terminal Building."