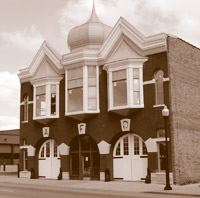 The old Central Fire Station is viewed by most Aurorans as the most significant, tangible reminder of the City's long tradition of fire fighting. The first organized fire protection came in 1856 with Jesse Brady's formation of a volunteer company. Part-time paid firefighters were hired in 1882. The central fire station was constructed in 1894, and designed by J.E. Minott in the Victorian Commercial style.

Stripped of all the Victorian details in 1943 when a permit was sought for "flattening" the building's front bay windows, the building was fully restored to its original character in 2003. This included the restoration of the bay windows with leaded glass transoms, installation of a replica onion dome, and new doors to match the originals. During the restoration, oats were still found between the floorboards as horses were housed in the building until 1916. Automotive fire trucks were then purchased and the horses put out to pasture! The building is now open to the public.