Other Local Landmarks In Aurora

The Aurora Hospital Association was organized in 1886 by a group of civic-minded citizens who raised donations for a hospital building. According to local lore, they were compelled to establish a hospital after an unconscious child was found in the yard of the Oak Street School. With no hospital facility, the child was taken to the jail. The Aurora City Hospital is an excellent example of Queen Anne institutional architecture. Only the cupola and porch roof cresting are missing from the original design.

Characteristic Queen Anne features include the decorative octagonal shingles in the gable of the projecting pavilion, incised brackets and turned columns on the entry porch, the lattice design along with the date on the porch gable, and the bay window supported by heavy scroll-sawn brackets on the south elevation. When the hospital opened in 1888, patients paid $1 per day for a bed, food, and care.

The Cooper house is an excellent example of the Prairie style of architecture. Features of this style include an emphasis on the horizontal lines of the house, art glass windows, and the wide-overhanging eaves. While the architect is unknown, it is thought to be the work of an associate of Frank Llyod Wright.

The historic red brick house was constructed in the British "I" plan. Stylistic elements of the dwelling adapt and combine late Federal and Greek Revival styles, including the symmetrical facade, and the heavy limestone lintels over the windows. The home was built of brick manufactured on the site from rich brown clay found beneath the thick topsoil. The brick is laid in an American bond, with header rows every seventh row, with stretcher rows in between. James and Annie Crane Brown were natives of Wayne County, New York, and came west in the fall of 1836. They made claim to the homestead that same year. In 1868 the homestead was sold to a son, DeWit Crane Brown.

Dr. Agnew was a prominent physician in Aurora. His house was designated a landmark in honor of his accomplishments as the first African-American physician in Aurora, and the charitable contributions that he made to the community. Dr. Agnew was recognized in the 1913 Funk and Wagnall's Dictionary, which was dedicated and inscribed to him. He graduated from Meharry Medical College in 1895, and came to Aurora in 1907.

Constructed in the Italianate style, the building still features the original pressed metal decorative cornice and the carved stone inset identifying it as AFD Number 3.

This fire station was designed in the bungalow style to "merge perfectly with its residential surroundings." Ironically, is now a being used as a private residence.

The Jungels family were early immigrants to Aurora from Luxemburg in what became known as the Pigeon Hill neighborhood. Part of the Jungels' farm was an Indian burial ground, which he never plowed out of respect. The house was built by George Jungels Jr. in the 1920s. It is a Four Square style with Craftsman influences.

Constructed of local limestone, the Holbrook Mill is one of the oldest industrial/commercial buildings in Aurora. It was located on land originally owned by Theodore and Esther S Lake, founders of West Aurora. In 1856, Owen C. Hines purchased the property for $1,600. Hines used the building as a livery for almost 20 years. In 1875 Samuel Jackson purchased the building to manufacture carriages. Following his ownership, it was listed as the Holbrook Mill on the 1887 Sanborn map, and has been known by this name ever since.

This Italianate style house was originally owned by Jane and William Holmes. William is listed as a guilder in the 1868 City Directory.

This original brick farm house was built in 1858 by Samuel S Ingham, an early Sugar Grove settler. It features Greek Revival details including the door surround, divided light windows, and square cupola. Ingham made detailed contracts with specifications for the Aurora contractors who built the house and who resided on the farm during its construction. The family still has many original documents for the farm including the 1840 land deed from the United States government, and papers from when Ingham served as a Colonel in the Spanish American War.

Property for the school house was donated in 1852 by Samuel Ingham. It was also designed in the Greek Revival style, and was used as a rural one room school house until the 1940s when it was converted to a residence.

Nelson James and his wife Harriet were over 60 years old when they built this house in the Stick style. It was constructed next door to the Italianate style home they built in 1865 when they originally moved to Aurora. Their son Herman and his family continued to reside in the Italianate home after they moved. Nelson James was a prosperous farmer and salesman who built or improved five properties in Aurora.

Constructed in the Italianate style by Samuel E Lawyer, this house features a brick front gable with decorative brackets.

A definitive date has not been established for this Greek Revival house constructed of local limestone. The estimated date is sometime between 1830 and 1850. The property was originally owned by Frank Mitchell.

A rare style, the octagon house is the only one of this type in Aurora. It was constructed sometime between 1867 and 1882. Only a few thousand octagon homes were originally built across the country. The style was made popular through a book published by Orson Fowler in 1849. 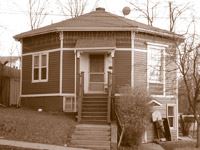 This is a unique Queen Anne style house with Shingle style influences, constructed prior to 1895. Decorative features include the fish scale shingles, and pressed metal frieze. The frieze is adorned with a repeated anthemion pattern.

An excellent example of the Queen Anne style, the Riddle house was constructed by Clarence and Carrie Riddle. Riddle was the owner of the Aurora Stone Quarry on South Broadway, which explains the unique checkerboard limestone foundation.

Robert Lyall was a mason in Aurora, and built this house in the Tudor style. Its unusual stonework laid in regular courses with random projecting stones give this house a unique textured appearance.

This was the home of pioneer schoolteacher Henrietta Robinson along with her mother and sister, Sally. The home was constructed of locally quarried limestone, and probably a gift from her uncle, Theodore Lake, founder of West Aurora. Henrietta taught at the first private school in Aurora, which was located in the basement of the home of George McCollum at the intersection of Lake Street and Galena Avenue (now Boulevard).

A.T. Thatcher was born in 1809 in Wayne County, New York. He came west with his parents in the year 1838. The Thatchers were amongst the first thirty families to settle in the area after the end of the Black Hawk War. After trying his luck in the California gold rush and operating a grocery store in Naperville, Thatcher built this Greek Revival style home near the current intersection of Ogden Avenue and 75th Street and took up farming. In 1999, the house was in the path of new development. It was purchased by the owners of The Growing Place on Montgomery Road, moved to that site, and restored.

Built in the Italianate style, this house features molded panels, paired scroll brackets under the eaves, and molded trim with incised wooden keystones above the tall, narrow windows.