Bridges are a natural feature to find in a city built on a river, yet they go largely unnoticed. Aurora has seen many bridges built in different styles and of different materials. The earliest bridges were constructed of timber. Two of the early timber bridges were dismantled and moved to North Aurora and Montgomery when they were replaced with iron bridges in the 1880s.

The old iron New York Street bridge was much photographed, with its sign which reminded motorists not to drive faster than a walk. It and the original North Avenue iron bridge were constructed with money paid to the city by the Chicago, Burlington, and Quincy railroad from stock purchased in 1870. Many concrete bridges were constructed between 1911 and 1931, including bridges at Illinois Street, North Avenue, New York Street, Main Street (now Galena), and Benton Street.

Almost all of the concrete bridges have been rebuilt to match the original design and materials, including different railings and light fixtures for each bridge. The restoration of these bridges is in keeping with the historic fabric of Aurora's early 20th century downtown commercial district, helping to contribute to its unique sense of place. 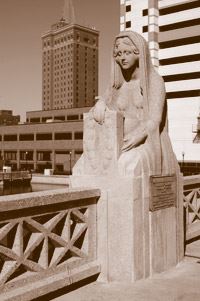