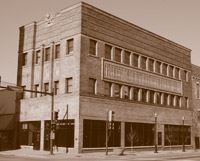 Built as a bank, and designed by George Grant Elmslie about 1925, this structure has undergone several alterations at the first floor level. The south facade originally served as an entrance with a stylized eagle on the silhouette proclaiming the use of the building. The long north facade has a highly stylized, Prairie style terra cotta frieze between the first and second floor windows. Similar Prairie style decoration appears at the top of the building, above the second and third floor windows, and framing the panel that separates the ground floor from the second floor.