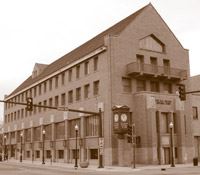 William George, bank president from 1895 to 1933, selected George Grant Elmslie to execute "a structure that would grow old with dignity and charm, but contain the spirit of a new day in commerce, the arts and the social welfare of the community." The result is this 1924 building designed by Elmslie in the Prairie style. It reflects some of the best features of this style, particularly the Roman brick masonry with its horizontal emphasis, the elaborate terra cotta ornaments, the stained glass windows in a stylized geometric motif, and the incorporation of sculpture into the design of the building.
An outstanding team of artisans was assembled by Elmslie to execute these details, including Emil R. Zettler, sculptor; John W Norton, muralist; and Kristian Schneider, who modeled the terra cotta designed by Elmslie. The bank patrons are recognized in Zettler's bas-relief sculpture depicting the trades in the community, such as farming, animal husbandry, commerce, manufacturing, merchant trade and mining. The mural on the inside depicts the history of the community.

The exterior building configuration demonstrates the Prairie style emphasis on the horizontal, especially the southern elevation with its rows of vertical piers, bands of window openings, and granite base. The front facade's vertical emphasis is due to the lot configuration, however, it too is broken with horizontal features, such as the spandrels between the windows on the front pavilion, the balcony, and the bands of windows.

Inside, the general configuration of the original space is visible, but the counters and ceiling have been altered. The walls have been divided into squares, with a piece of colored ceramic tile set in each corner, which form a part of the original Prairie style interior. It is listed on the National Register of Historic Places.

A later addition to the north is compatible with the original design, yet clearly distinguishable from the historic building. Old Second has been an exceptional caretaker, and has published a complete history of the building.