During the late 1840s Samuel McCarty constructed Aurora's first water system. Along the foot of a bluff located near what is now Lincoln and Spring Street, several springs flowed out of the ground. Area residents would gather water from these springs for drinking. It was from these natural springs that Spring Street was named.

From the largest spring, named McCarty Spring, Samuel McCarty constructed a crude water system by building a reservoir of timbers and tapped it with a square wooden pipeline. The wooden water main flowed by gravity and provided water to the east side of the downtown, including the McCarty Hotel (later known as the "Aurora," and still later as the "Tremont"). Also connected were business houses and the Empire house. This spring flowed until about 1915 when it diminished in flow and was condemned during a typhoid fever epidemic.

In 1884 the City looked at several possible water sources for fire protection as well as drinking water supply. The plan that was adopted was that of City Engineer Chester Davis. An island north of the City now called Indian Trail Island was secured from the United States government and a channel about 20 feet deep and several hundred feet long was cut into it. The channel was lined with limestone and covered with timbers. The channel was then connected with a pipe under the river to the east bank of the river to a reservoir. The plan was that the natural gravel island could filter the river water to be used for public water supply. There was a great deal of concern and objection from citizens to drink river water, however, the City Engineer Chester Davis insisted that the water was being pumped from a well on the island.
The island intake structure, or collection well, was connected to the City Water Works pumping station which was completed in March of 1886 at a cost of $150,000. The Water Works pumping station used steam pumps with a capacity of 4 million gallons per day. (The average day of 1889 was 800,000 gallons.) When completed, the works consisted of over 20 miles of mains, 245 hydrants, and a steel standpipe 18 feet in diameter holding 283,000 gallons. 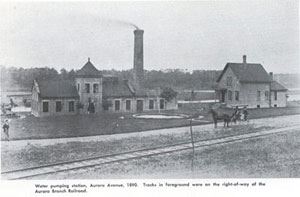 The river water source was abandoned in 1892 when the City drilled its first deep well. This well used an air lift pump that literally blew the water up from 190 feet below the surface by means of air pressure. This well, No. 1, was originally drilled to 1381 feet but later was deepened to 2235 feet.

The next major water works project began in 1933 by securing WPA assistance. The project included a 1.5 million gallon water tower located on Hill Avenue (demolished in December 2013), drilling of Aurora’s 13th well (which was named Well No. 12A), construction of a 4 million gallon reservoir, and construction of a Main Pumping Station capable of pumping 9 million gallons of water a day. This, along with several miles of 12, 14, and 16-inch water mains, were completed in 1935 for $505,000.

In 1987, in anticipation of the rapid growth of the southeast section of the City, the 5 million gallon Southeast Standpipe and Booster Station were completed.

Shortly before that, in 1986, City officials authorized Crawford, Murphy, and Tilly, Inc. (CMT), Consulting Engineers, Springfield, Illinois, to perform an engineering study of Aurora’s water supply and distribution system. This was done to investigate water supply alternatives to meet the City’s long-term needs, and to achieve compliance with federal radium standards having a deadline of July 1, 1990.

CMT completed the original Water Master Plan in 1987, and was subsequently commissioned to design a new River Intake Facility and Water Treatment Plant (WTP), as part of a $40 million water works improvement program. At that time, it was Aurora’s largest public works project. The WTP was the largest single construction project, with a cost of $19.76 million.

In April 1992, the WTP was placed in operation, and for the first time in approximately 100 years, Aurora was again drawing upon the Fox River for its municipal water supply, as well as from three new shallow wells and previously existing deep wells. The WTP treatment processes includes lime softening (to remove hardness), coagulation, recarbonation (to reduce pH after softening to a more stable level), high rate filtration, fluoridation, and disinfection.

During the 1990s, Aurora’s growth continued. In 1998, CMT completed a Water Master Plan Update. This eventually led to the WTP Expansion, which was completed in 2002, and provided one additional “Claricone” softening/coagulation unit, additional high-rate filters, and two new 1.13 million gallon clearwells to provide additional contact time for disinfection and finished water storage capacity.

Additional wells and storage facilities have also been constructed. In 2003, the new four million gallon Barnes Road Standpipe was completed, and an adjacent booster station was placed in operation in 2006. In 2005, a 1.5 million gallon storage tank was constructed near Phillips Park, to replace the aging Hill Avenue Elevated Tank.

Today, the City has a total of 16 deep and six shallow wells, and 17.5 million gallons of operational distribution system storage tank capacity.